This is my take on Diana: Her Fashion Story. 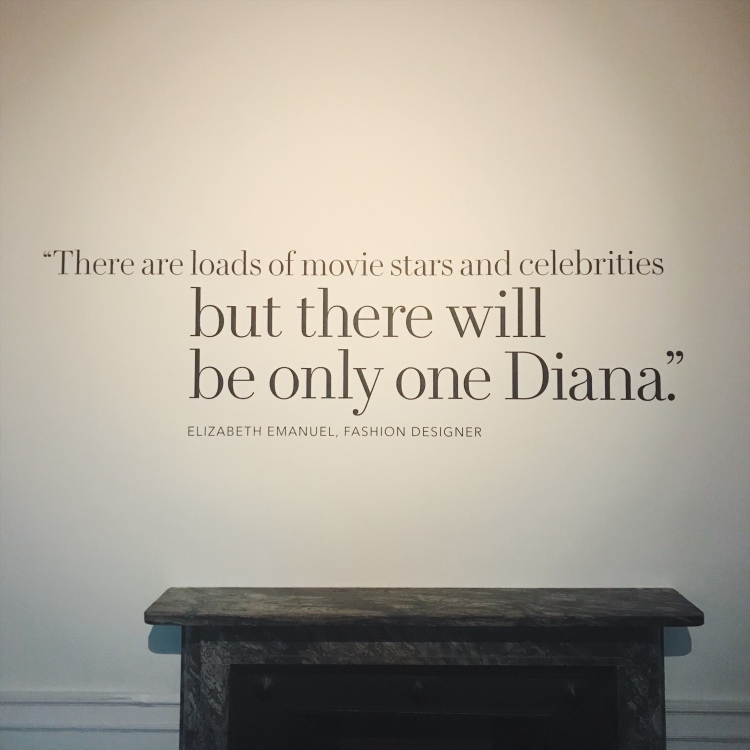 Diana’s entry to the spotlight helped shaped her wardrobe – it is said her wardrobe, before entering the world of fashion, consisted of three staple items. Luckily, there was more than 3 pieces in the exhibition.

Becoming the Princess of Wales put her in touch with some of the best designers the UK had to offer and “popularised the romantic fashion movement of the 1980s, with light colours and lacy, flowing fabrics.” 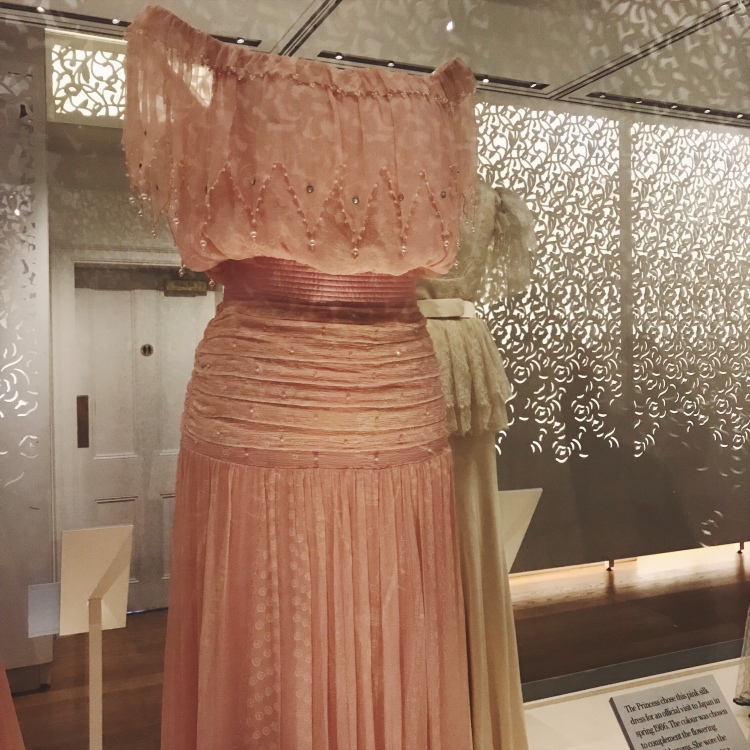 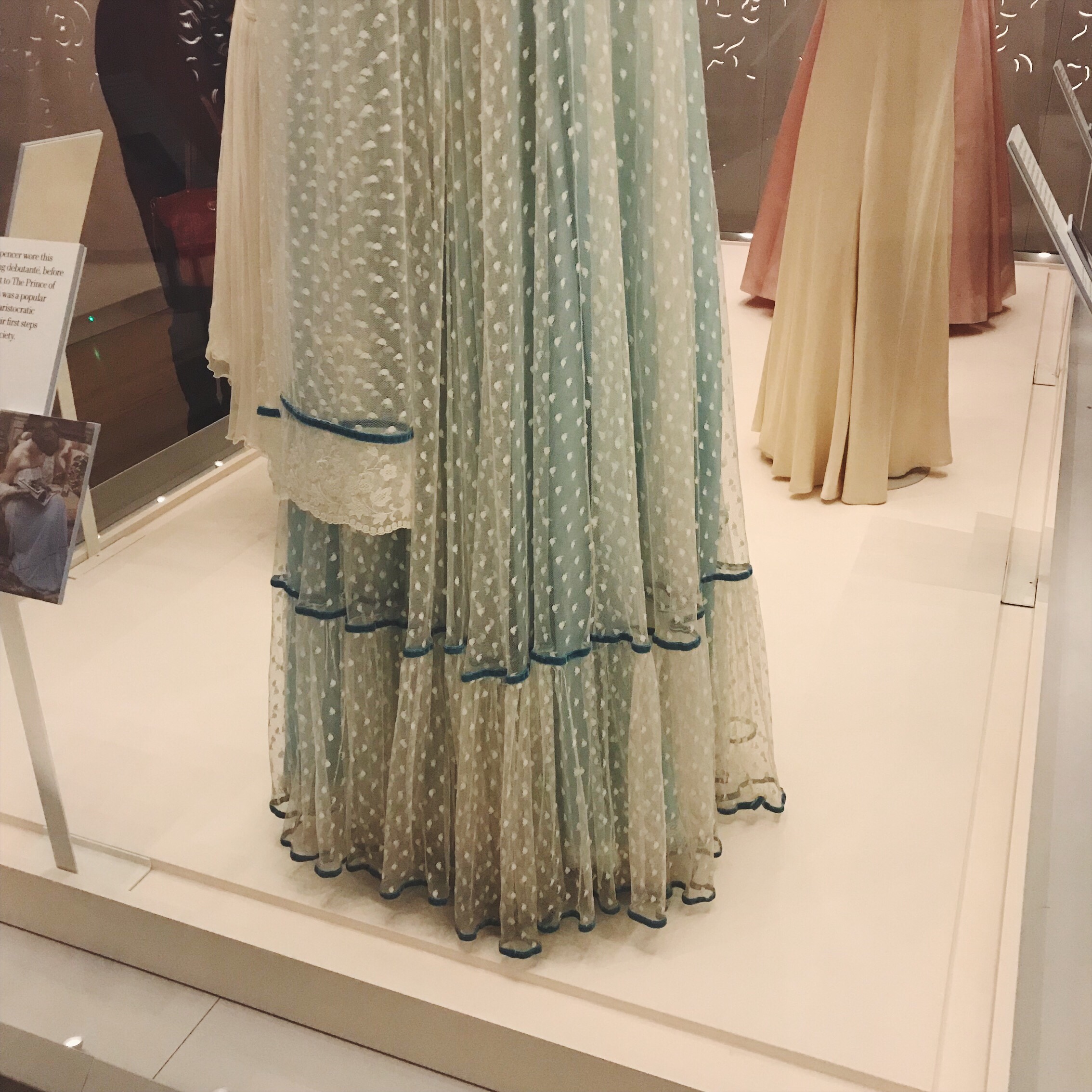 The pastel pinks and blues were ruffled and scrunched and frilled and flowy. The designs were enhanced by delicate layers of lace and raw silk on pastel colours. 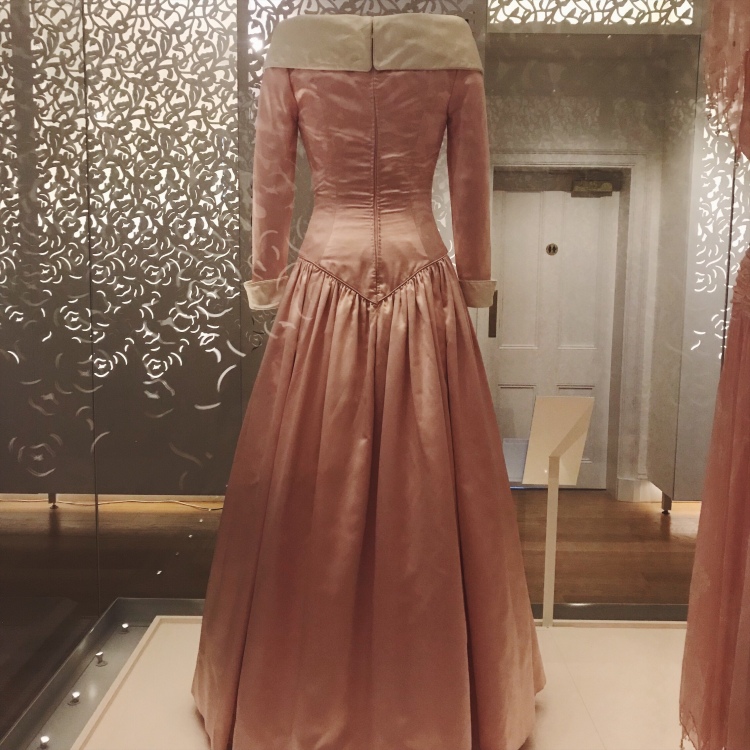 These pieces were older than me! And they mark the beginning of Princess Diana’s fashion journey and royal life. She set the tone of her style which the public saw began to evolve and adapt throughout her public life.

The second section of the exhibition showcased Princess Diana’s work uniforms and formal pieces. The work suits were bolder than pastel gowns and as intricately designed as her later gowns. The exhibition prompts you to recognise how her fashion became more style focused and bolder as her spotlight exposure grew. 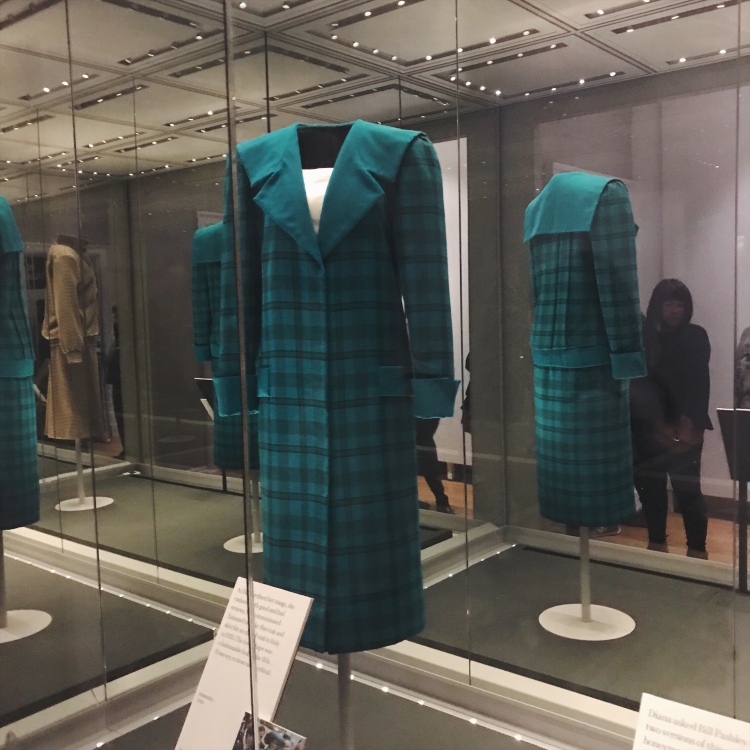 This turquoise tartan suit, a piece by the Emanuels she wore in Venice mid-80s, re-branded her image and style – it was bold. Her suits then became somewhat of a “royal uniform.” 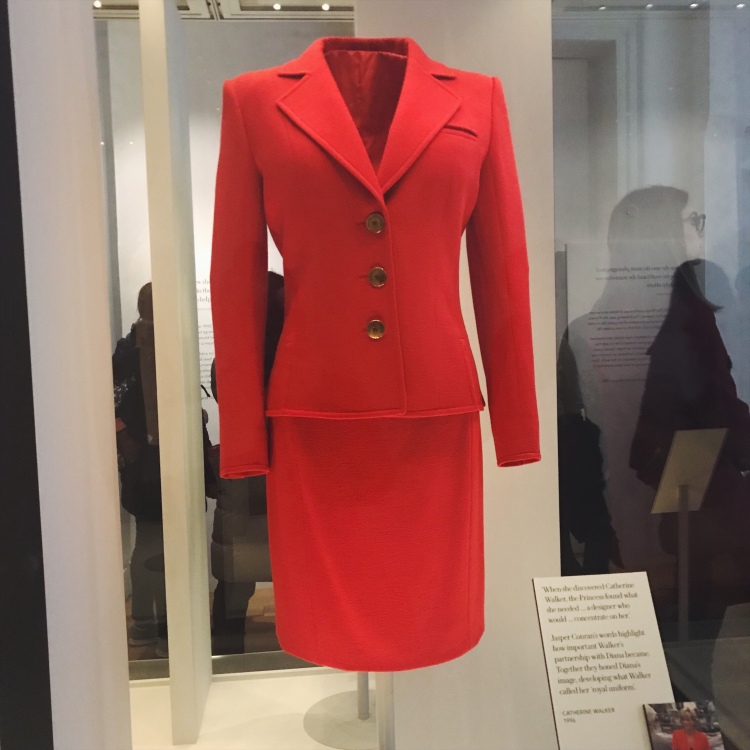 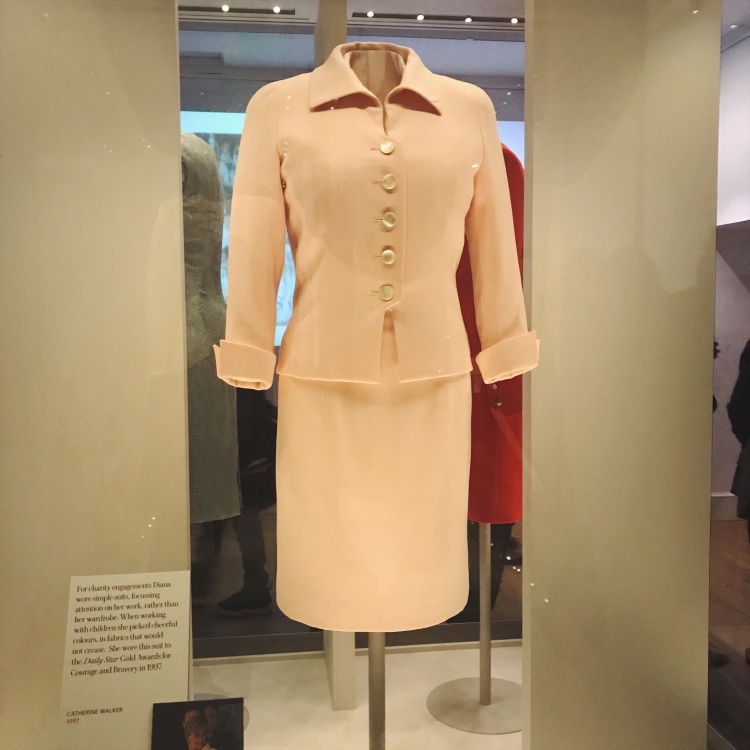 The majority of Princess Diana’s charitable work was centred around children, and it was important to her that the suits she wore to such events were cheerful, such as these light pink and red skirt-suit sets.

Each appeared tailored to fall elegantly but professionally. No fabric seemed too pinned or loosely hemmed, each skirt and blazer combo matched the other in professional precision.

The ballgowns were the most compelling pieces of the exhibition. The plaques dotted around the glass cases detail how at her peak in the spotlight, Diana favoured statement colours and designs on elegant fits. The Princess’ ballgowns became the epitome of modern royalty. 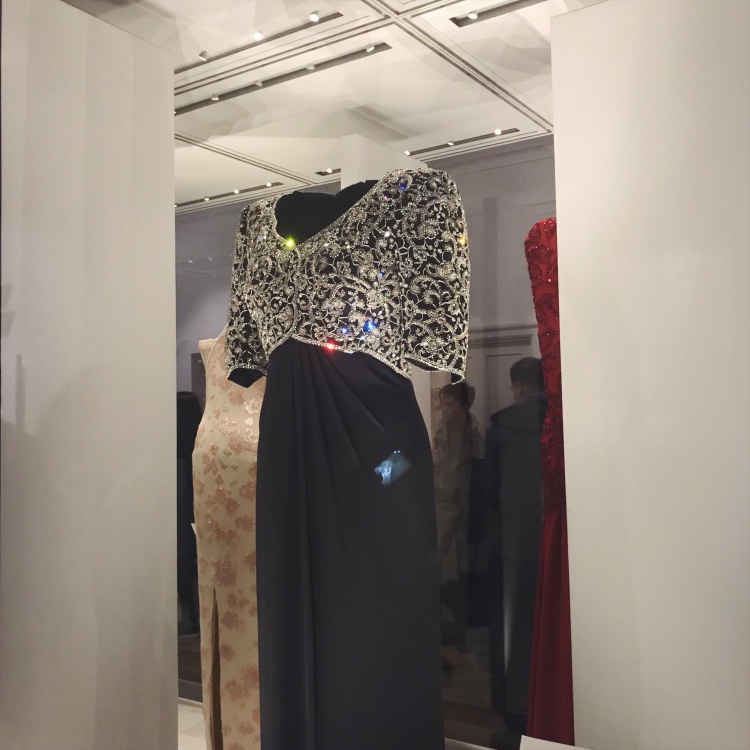 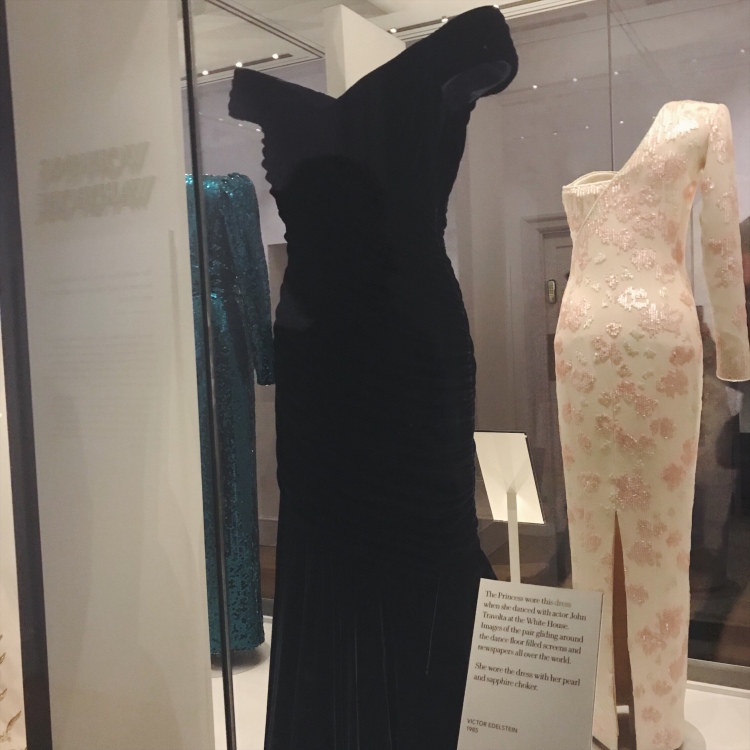 The evolution of her modernisation of elegance really came through at the end of the exhibition as the room of gowns was full of character and a more sophisticated style of elegance. Diana, evidently so, did not shy from sequins or crystals, and no detail was spared. These bespoke gowns were showstopping. 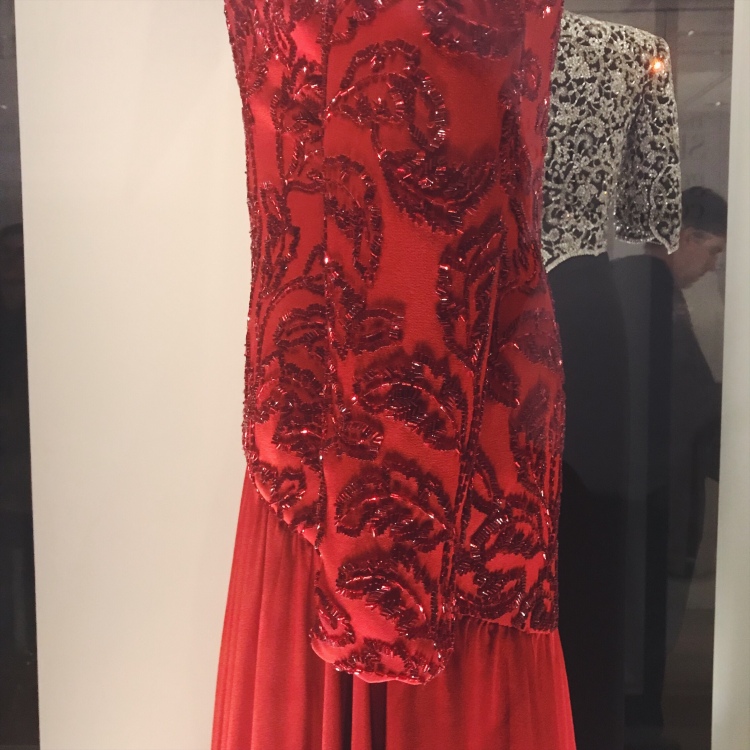 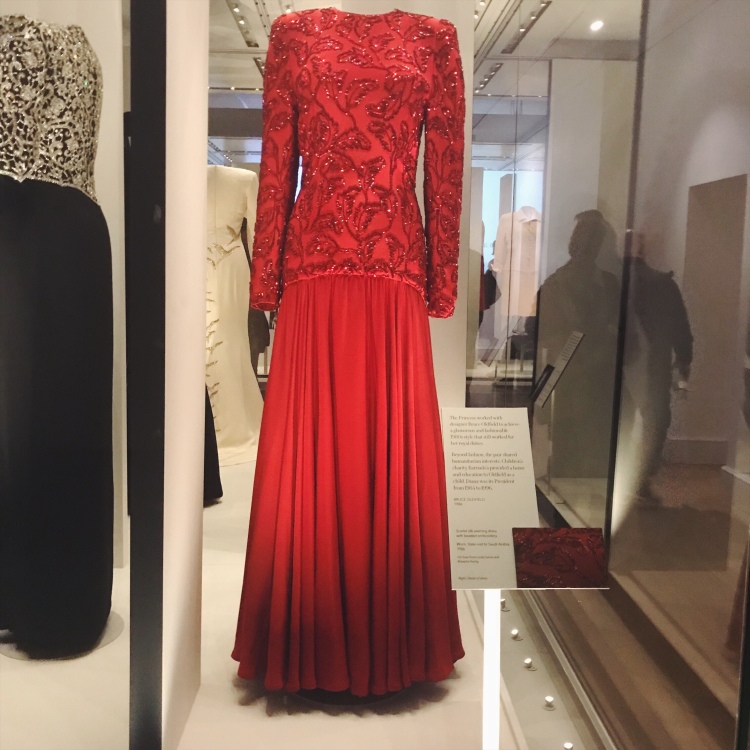 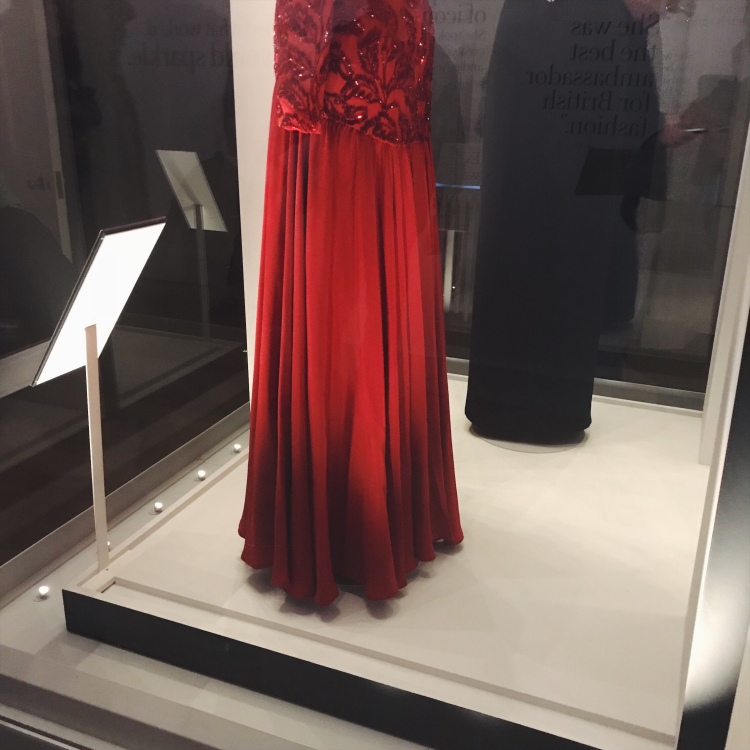 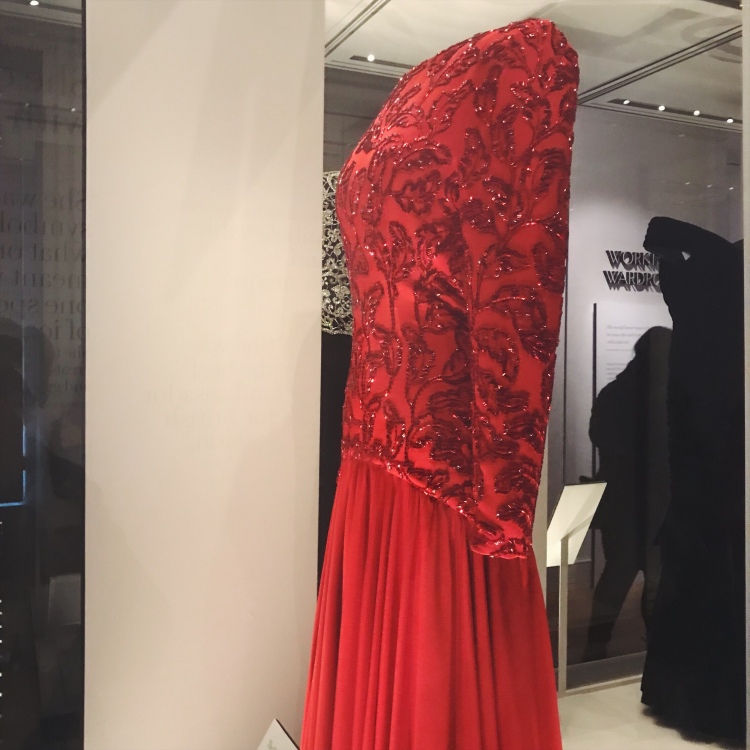 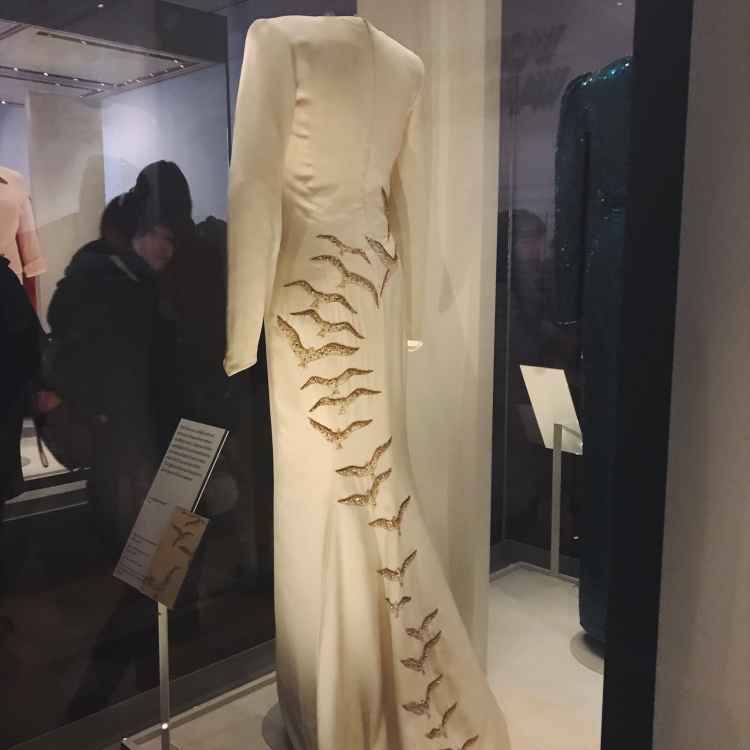 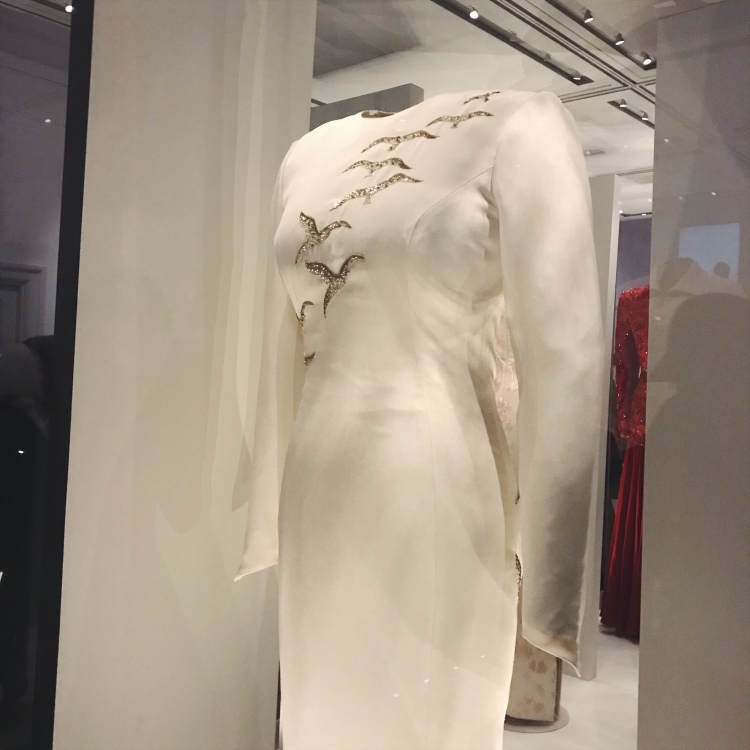 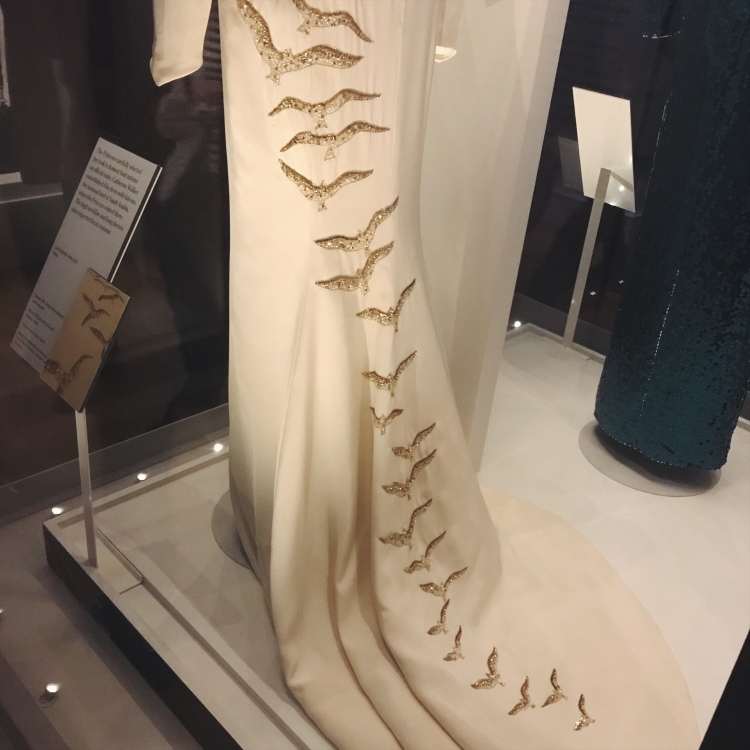 I was in awe of the white Catherine Walker gown, and the detail of the golden Falcon’s adorning its train. The folded train was a physical extension of her personality finding its way into the designs.

I’d even go as far as to say it was my favourite piece.

The exhibition held a wall dedicated to the sketches of designers including Roland Klein and Beliville Sassoon, of which it is said she played a large role in their creativity. 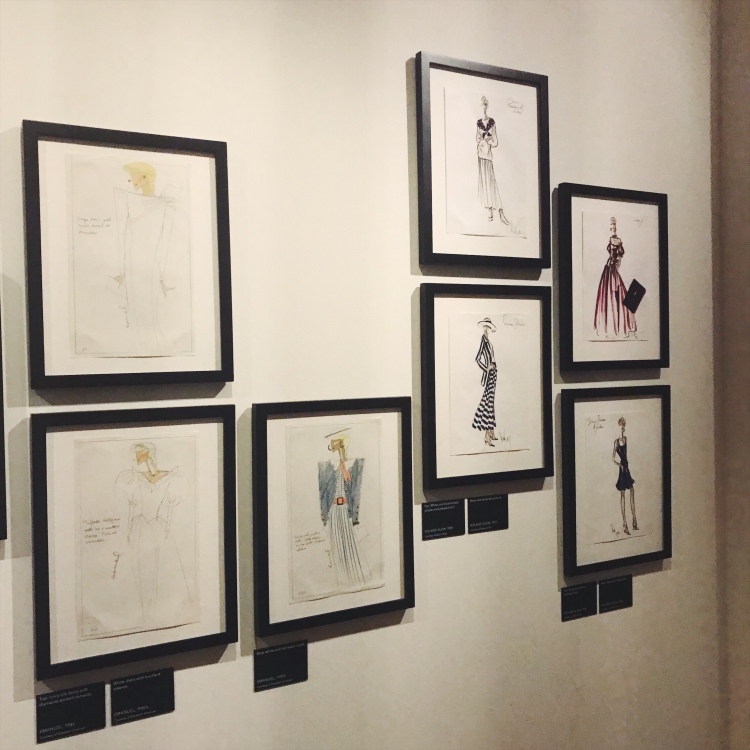 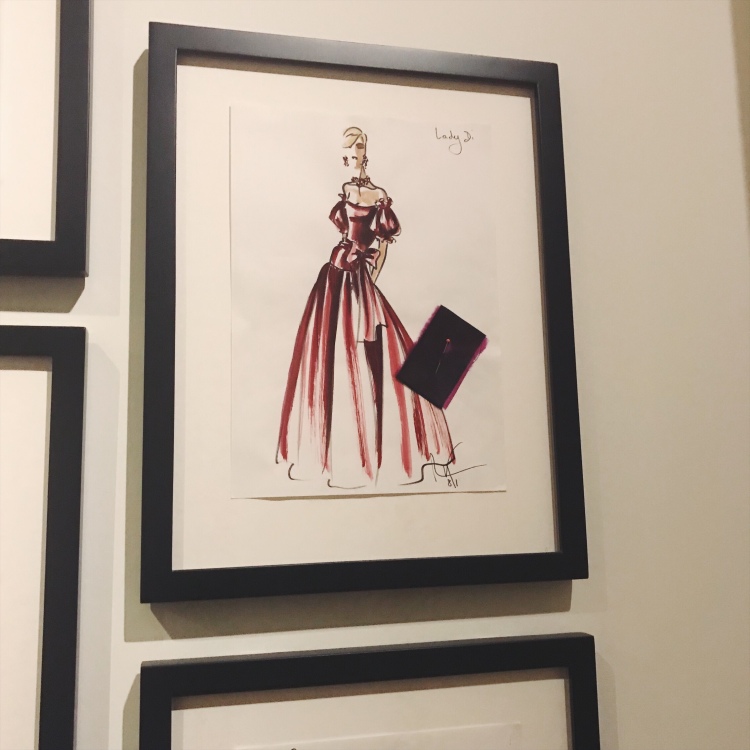 “Whenever the Princess discussed her clothes with me, part of I was always “What message will I be giving out if I wear this?” For her, that became the real language of clothes.” – Jasper Conran 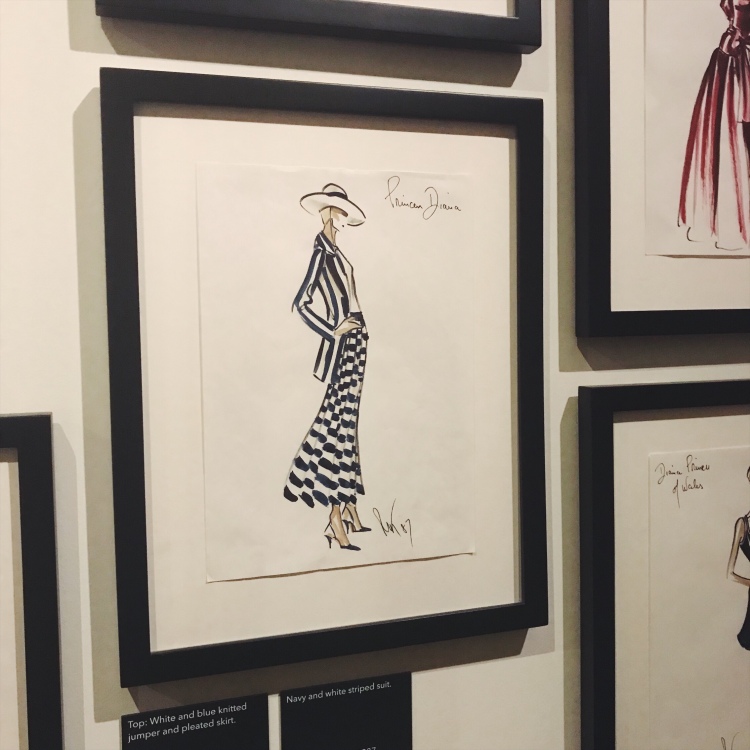 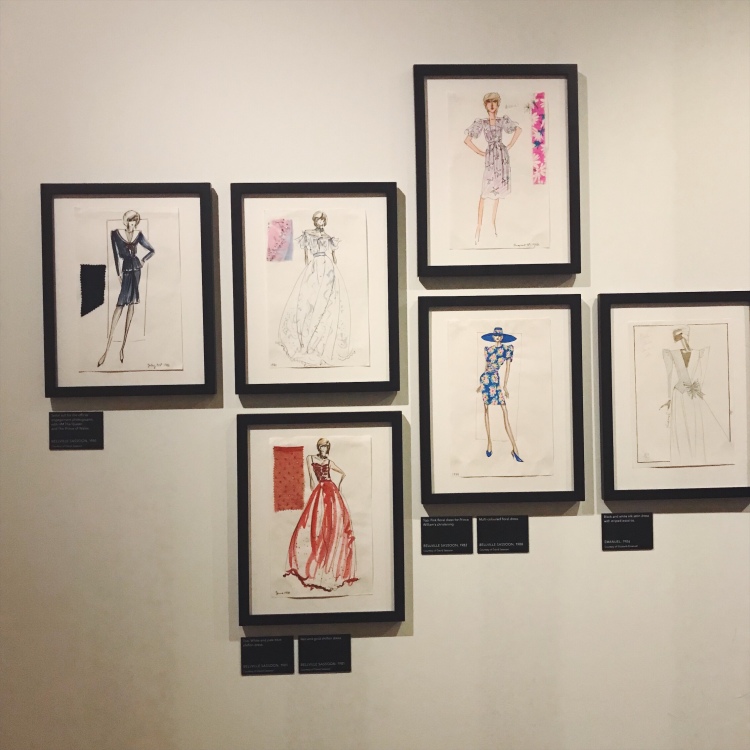 I loved the narrative these sketches encouraged – how had the translation from paper to fabric happened? What did Diana change? Why had she annotated that on that design? 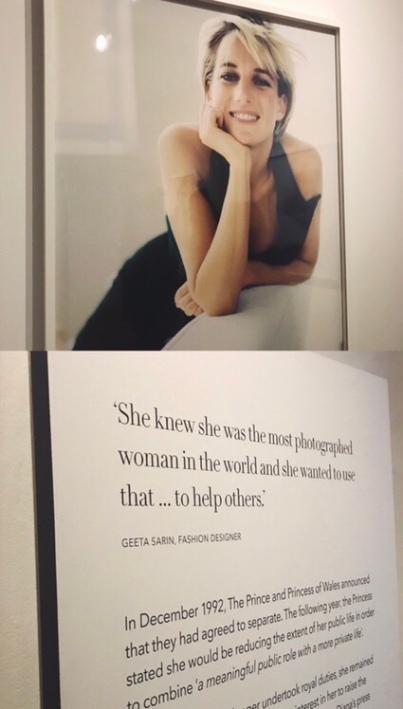 Diana’s wardrobe was somewhat glamorous and practical, and the evolution of her style was so well depicted in Kensington Palace. It was a truly moving tribute to the Princess of Wales.

If you find yourself in central London, I would definitely recommend a visit. Decide your favourite piece for yourself, when your own eyes have seen them in all their glamour.